One of the challenges facing Stewart Hayfield, a personal trainer with just 2 years of experience, was that his would-be clients would not turn up to his free taster sessions. Having tried various methods, which included trying to take payments upfront or agreeing on suitable timings for his would-be clients, he just could not get prospects turning up to their first session. 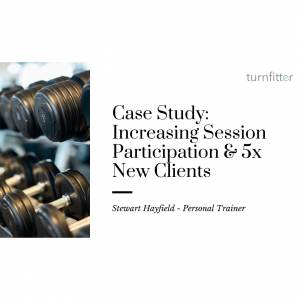 Naturally, this led to a lot of frustration. Without a huge network of previous clients, Stewart was getting anxious that he may not be able to get enough clients to run his own fitness business.

As he did have a small base of loyal customers, he knew that he had the skillsets to make the business work provided he managed to attract more prospects to his 1 hour-long taster session.

Being confident in his own abilities to convert, he really wanted to find a way to entice people to his free opening sessions knowing he would be able to convert them into customers, as a natural consequence of him having worked out a great structure to run the taster session.

Luckily, this is when Stewart stumbled across turnfitter’s reward based platform.

Turnfitter came in and helped Stewart understand the persona he should be targeting along with insights into understanding the Lifetime Value of his clients. Within moments, he was able to begin piecing together a strategy where he was allowed to create rewards to entice prospects to his taster sessions.

He created 2 rewards on turnfitter aimed at two different demographics, one a $5 dollar gift card for Chipotle and secondly a $10 reward for lululemon.

Within an hour of sending the lululemon reward offer, he had 9 new booked sessions from the 25 females he targeted in the campaign.

In all, from these 9 sessions, 6 of them converted into clients which yielded an amazing ROI on the $90 he spent on sending out the lululemon gift cards.

Stewart Hayfield: “I had been using free trials on a few online software solutions targeted towards personal trainers, and to be honest I was fine running off Google Docs. I always thought I had to have more than a handful of clients to justify the costs associated with a software, that’s until I spoke with Craig over at turnfitter. He set me up and showed me how I could use rewards to get more prospects into my taster sessions. The week straight after I sent my very first campaign out was the busiest I have ever been. – ever!

Thanks to turnfitter I am now finally turning my passion into a reality., running a real fitness business. My next move is to use turnfitter to help me create a brand and use their scheduling feature on my website. Finally saying bye-bye to Google Docs as well.”

Stewart Hayfield is a personal trainer aimed at helping people with not that much time to get fit in Providence, Rhode Island. You can email him on stewarthayfield7@gmail.com

Join the leading fitness businesses that are comitted to growing their business. FREE (no credit card required)